It’s unfortunately become a common occurrence every summer here in Chicago. The Blackhawks being forced to shed players/salary to make room for contracts to fit under the league’s salary cap. It’s no fun, but it’s part of doing business.

On Wednesday the Hawks gave away young talent, and in the process finally dumped the worst contract in franchise history, in hopes of squeezing back under this summer’s cap. The Hawks traded Bryan Bickell and Teuvo Teravainen to the Carolina Hurricanes for two draft picks (2016 2nd round – 2017 3rd round). The Hawks were finally able to dump Bickell off of their payroll, but in the process had to lose arguably their best young player to do it. 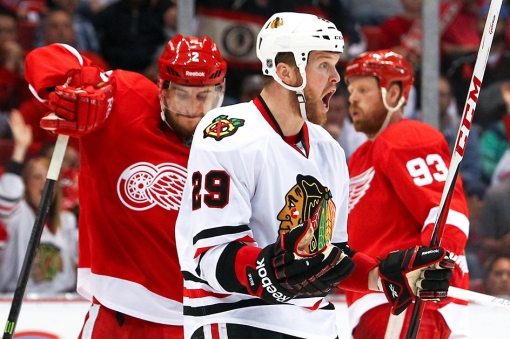 This all began when GM Stan Bowman and the Blackhawks gave Bickell an absurd 4-year 16 million dollar contract after the 2013 run to the Stanley Cup. Bickell was a pivotal part of the Hawks’ success that postseason, potting 9 goals and 17 total points. At the time many fans looked at that deal with skepticism, turns out most of us were right. Since the deal, Bickell under performed on the ice and the Blackhawks have been forced to (or voluntarily) deal young talent to shed salary, mostly hung up in Bickell’s absurd deal (would be a four million dollar cap hit this season).

The Bickell deal basically cost the Hawks Saad and Teuvo. Let that sink in.

It doesn’t take a genius to figure out that the deal severely hamstrung the Blackhawks’ championship window. As great as Stan Bowman is, his Bickell deal is arguably the worst contract move in the long history of the franchise (and there have been some bad ones: The Chelios trade, Roenick trade, Hasek trade, heck we can go all the way back to the Max Bentley trade…).

Paying a guy like Bickell SIXTEEN MILLION dollars for one hot postseason was just as ludicrous in 2013 as it is now. It wasn’t like the Blackhawks were grasping at straws either, they literally had a loaded farm system full of young talent to replace Bickell if he chose to walk.

Let’s take a look at some recent trades as a result:

Saad, Teravainen and Johns should have been the foundation of the lineup for the next decade, instead they have all been traded away in their early 20s…

As “The CI” pointed out today, there’s no guarantee any of those guys would have been incredible impact players on the Hawks. But they would have been cheap and at least competent NHL-ers.

Let’s say the Hawks let Bickell walk in 2013. Saad, Teravainen and some of those other guys are likely still on the team. The Hawks’ championship window is easily still open for a decade or longer (possible legit Cup run in 2016).

Again, this is all speculation. The core of the team is still here and will be competitive for years. But assets to that core that should be here have been forcibly shipped out due to one awful decision.

The modern NHL isn’t designed to foster dynasties, and that’s a reality that all teams have to face. One friend of mine on Twitter put things in perspective though. Pointing out that at least the Blackhawks took advantage of this era by already winning three Stanley Cups in six years. Think about the Rangers, almost same talent as the Hawks the last 6-7 years with nothing to show for it.

The Hawks’ title aspirations certainly aren’t dead. But the championship window could just be a little more closed than we previously thought.

Hey, at least we’ll always have this… Thanks Bryan, and Finnish Baby Jesus (gone too soon…)