So, I’m watching last night’s game… and during the second intermission I had to check my anger after the Blackhawks gave up a bad tying goal late in the period. I don’t normally get worked up over regular season games. As I’m calming down, I realize how astonished I am that the Blackhawks playing the Red Wings still has such an effect on me.

In the grand scheme of things, last night’s game didn’t really matter. The Blackhakws are really good. The Red Wings have some talent up front, but major deficiencies elsewhere that will probably leave them out of the playoffs for the first time in 25 seasons. So why did it feel like a playoff game? Why did I throw a pillow across the room during a regular season game?

The easy answer is that it’s Detroit. The Wings’ move to the Eastern Conference after the 2013 season ended one of the NHL’s longest and most bitter rivalries. The teams now only meet twice a year, and probably won’t play a meaningful game for a very, very long time.

But this one felt meaningful. Even as the rivalry has lost some luster over the past few seasons, this game felt different. When the Hawks went up 2-0 in the first period, for some reason I got really bitter. “Bury these guys,” I kept thinking out loud. “POUR IT ON!” I wanted so badly for the Hawks to put up six or seven on Detroit, like a final nail in the coffin as their season and playoff streak unravels.

I honestly don’t know where those feelings of contempt came from. Actually, I know exactly where they came from, I just don’t understand why they rose to the surface out of nowhere.

The Detroit Red Wings were the first sports team that my dad taught me to hate. (And I don’t like to throw that word around lightly, but sports hate is a different context). I understood from day one, at the age of five, who the enemy was.

When it comes to hockey, the Red Wings pretty much destroyed my entire childhood. I grew up in a world where Detroit was the class franchise of the NHL, and the Blackhawks were literally voted the worst franchise in sports. For years, all I knew as a Blackhawks fan was heartbreak, especially against Detroit. Sure, the Hawks would eek out a win over the Wings once in a while. But big picture Detroit owned the Hawks, and we all knew it.

I remember watching my dad’s VHS of the 1992 season over and over and over again. Brent Sutter’s goal in Game 4 of the Norris Final vs. the Wings to seal the series sweep at The Stadium (my parents were there). Watching Eddie Belfour slug Bob Probert in Game 2 of that same series, and Dirk Graham’s tip-in winner late in Game 3.

Watching in utter disgust in 2002 as the Red Wings hoisted their third Stanley Cup in six seasons. Seeing the look on my dad’s face as Chris Chelios raised not one, but eventually two Stanley Cups in a Red Wings uniform.

Sitting in a United Center that was filled with Red Wings fans whenever Detroit came to town because our fanbase had become so alienated by the constant poor product. In third grade my friend and I felt bold enough to join in with the “DE-TROIT-SUCKS” chants while our dads left to get drinks. The cold, hard truth was that Detroit was amazing. The Hawks sucked.

Lying in bed one night (mid-2000s, maybe ’05 or ’06) listening to a game on radio, stunned as the Hawks blow a 2-0 lead, allowing the Wings to score three times in the final few minutes to steal the game. (I don’t know why I remember this game so clearly). 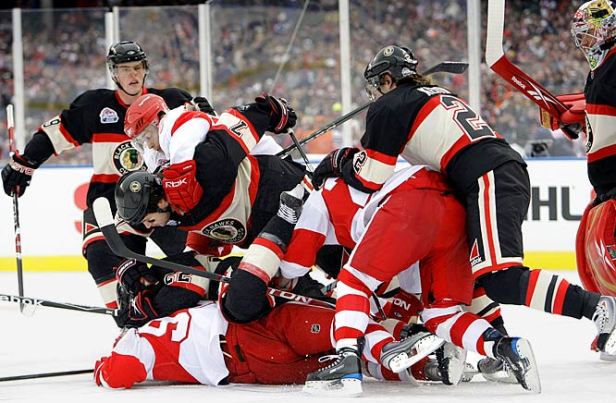 Of course, it finally became our time. The Hawks rebuilt and gave fans hope for the first time in my young lifetime. The 2009 Winter Classic at Wrigley Field was a first step. Finally, the Blackhawks on the big stage. On local AND national TV, no less! Taking an early 3-1 lead over the dreaded Red Wings… only to once again cough it up, losing 6-4.

That same season, the Blackhawks made it all the way to the Western Conference finals, the farthest they had made it in the playoffs in 14 years. Of course, standing in their way, the defending champions, the tested and established Red Wings… We should have seen it coming. I was naive, as were most fans probably. The Hawks were outclassed by Detroit, easily dispatched in five games. They weren’t ready.

I was a freshman in high school, not yet mature enough to see the big picture in life, let alone my sports teams. Darren Helm’s OT winner in Game 5 to end that series felt like someone had just stabbed me in the chest. I cried after that one (not even close to being emotionally mature at the time). I failed for a moment to see the process that was at work.

The rest, as they say, is history.

The Hawks learned from their 2009 defeat. They came back the next season and won the city’s first Stanley Cup in 49 years. Easily the greatest sports moment in my life, bar none. Three years later, the Hawks came back from a 3-1 series deficit against the Red Wings in the second round. Winning the series in overtime of Game 7 at the United Center. Officially “closing” the books on the rivalry with a dramatic final playoff triumph over Detroit that was long overdue. That moment was as close to the mountain top as you’ll get, at least it was for me. We all felt like the the Hawks NEEDED to go through the Wings. They did, en route to another Cup. 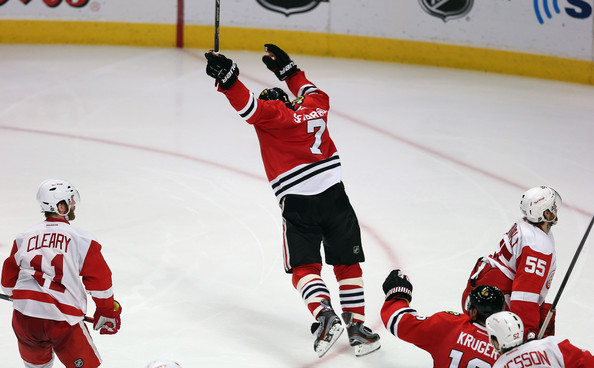 To wrap this all up, while I was watching the end of the second intermission last night (while also processing all of these unhinged emotions and memories) I noticed the large group of kids behind the WGN set on the UC concourse. Most of them looked around junior high or high school aged, maybe college, maybe slightly younger. I kept thinking to myself, does this demographic of Hawks fans even realize the “magnitude” of this game? Do they even have these same emotions towards the Wings? What is their life like growing up in a “Detroit-less” hockey world in Chicago?

It’s been three years since the Wings bolted from the conference. It’s crazy to me that a whole new generation of Blackhawks fans will grow up not fully knowing the scope of this great rivalry, or true Red Wings “hatred.”

Detroit will probably miss the playoffs this year (finally), and go into a mini rebuild as they enter their new arena. The Blackhawks will make the playoffs, and compete for a Stanley Cup for the eighth straight season. Sitting back, I’m blown away by how much this rivalry has changed in my short life.

It will never be the same, but it will always feel big.