It was 11 years ago that the Chicago White Sox went wire-to-wire, rolled through the postseason, and brought Chicago its first World Series championship since 1917. White Sox fans have taken great pride in the fact that we were the ones who broke their curse first.

Fast forward to now. The young and fun Chicago Cubs have captivated the city, and the nation, as a team that seems destined to end their 108-year championship drought. The Cubs defeated their rival Cardinals 6-4 on Tuesday to advance to their first NLCS since 2003. On a current 12-1 run, the Cubs are the hottest team in baseball, and by my eye test, head and shoulders above everyone else in the playoffs. Now awaiting the winner of Dodgers-Mets, Cubs fans are as confident as ever that this is “the year.”

I have been a White Sox fan my entire life. 2005 was one of the most thrilling sports journeys I have ever been on. That team was special. Outside of 2005, there have not been many years worth celebrating on the South Side, same goes for Cubs fans to an even greater extent.

I also have no problem admitting that I am a Cubs hater. I don’t think there is anything wrong with that. I think the rivalry is healthiest when the two sides cannot stand each other, and when are both winning (which rarely happens). I doubt Cubs fans care how Sox fans feel right now, I know for a fact Sox fans didn’t care how Cubs fans felt in 2005. But with that being said, here are some of my feelings while watching the Cubs march towards a World Series… (Disclaimer: These are just my general observations and feelings. In no way am I trying to make blanket statements. You can believe what you want.)

-This year was deemed the year where the Sox and the Cubs might both compete for a title. Young stars and talent on each team gave both fanbases calls for hope. Then the season started and they went in completely different directions. The Cubs started winning and playing with a loose, reckless abandon instilled by manager Joe Maddon. The Sox… didn’t do any of that winning stuff. It was a tough year on the South Side, and to make matters worse, those noisy North Side neighbors have kept on winning, all the way to the NLCS.

-I already tweeted this, but my personal policy as a Sox fan going into this Cubs postseason is this: I am NOT going to root for the Cubs. In fact, I’ll probably be rooting against them at every step. And I think there’s nothing wrong with that. But when (if) the moment happens… the moment the Cubs win it all… I’ll be happy for all of my family and friends who have waited so long. You have my word on that. You can’t deny history, no matter how badly it tastes…

-I am not ignorant to history. The Cubs winning the World Series would result in the biggest celebration in sports history. Period. More than Boston, and more than the White Sox in ’05. It’s just different with the Cubs, even though the Sox waited almost just as long. It is just different, and I realize that.

-As much as I hate to say it, a Cubs championship could be exactly what the White Sox need to move on from 2005 being “good enough.” Honestly, I can’t think of a better fire to light under the ass of the White Sox front office than a Cubs championship. What a wake-up call that would be on the South Side. No more resting on “well we had 2005, so we’re good for awhile.” No, start working to win NOW. Chicago baseball has had a culture of complacency for a century. A Cubs title could end that for both franchises. Honestly what would be better than the Cubs AND the Sox both being competitive and fighting for championships for an era? It would captivate the city.

-Cubs fans had to endure Sox hysteria in 2005, so it is only fair they we have to go through this. It’s just a weird feeling. I don’t know any Cubs fans who cheered FOR the Sox in 2005. So I don’t think Sox fans reaction here should be to switch their allegiance for a month. But if you choose to do that, okay…? You can choose to do whatever you want, I guess. The Cubs bandwagon is already huge (not a bad thing, I’ve never been anti-bandwagon).

-I love Chicago. When Chicago is happy, it is hard for me not to be happy. Being completely honest, it is hard sometimes to not get caught up in all the Cubs hysteria and happiness. I think it’s human nature to want to be happy, and when you see so many friends and family happy you want to be a part of it. Seeing the impact of this Cubs team on my friends and family makes me feel a certain way. I don’t know, maybe I’m crazy. I just want to feel that way for the White Sox again.

-Living in a split sports city is sometimes fun, yet most often it sucks. It’s easy to feel great when we can all unite and be happy when the Blackhawks win, and win again, and again… But when it comes to the rare times of success for Chicago baseball, it creates division, which is weird for a normally united and proud city when it comes to sports.

-Sox fans must realize that we are witnessing history, as bitter a pill as that is to swallow. (It’s extremely bitter)

In closing, I guess I am happy for you, Cubs fans. You have waited a long time. I have my issues with elements and characteristics of your fanbase from time to time (all of the time). But I recognize the history at hand. This Cubs team is special, and will be loaded for a decade. We are basically watching the 2009 Blackhawks in baseball form. It’s a dream for you, and a near nightmare for us.

So enjoy this postseason Cubs fans, all of Chicago and the world will be watching. So are White Sox fans, and I hope this gives a little glimpse into how we feel this October. 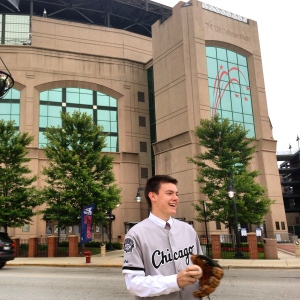