In the 1992 Norris Division Finals, the Blackhawks faced off against the No. 1 seed in the division, their arch rival the Detroit Red Wings. The Hawks had only defeated the Wings just once during the 1991-92 season. No one was giving the Blackhawks much of a chance against Detroit. But in this chapter of the rivalry, the Hawks would not be fazed.

After winning Game 1 and Game 2 in Detroit in convincing fashion, the Hawks returned home to the sanctuary of Chicago Stadium. A shootout in Game 3 lead to a 4-4 tie late in regulation. Igor Kravchuk’s shot from the point was redirected by Dirk Graham for the game-winning goal in regulation. With a 5-4 win, the Hawks were a win away from a sweep of Detroit.

In Game 4, the goalies Eddie Belfour and Tim Cheveldae stood tall throughout three periods of hockey. Both teams had chances back and forth to take the lead, but no one could muster up a goal. Until 1:34 remaining in regulation when Brent Sutter drove hard to the net to give the Blackhawks a 1-0 lead, and blow the roof off of the Old Stadium.

Bedlam. Sutter’s goal was enough. The Hawks held on for the final minute to win the game 1-0, and sweep a team they defeated only once during the season. The underdog Blackhawks had prevailed, and moved on to the Campbell Conference Finals to face the Edmonton Oilers.

Sutter’s goal is one of the most memorable in Blackhawks history because of it’s timeliness, and because of the fact that it was against Detroit in the playoffs. My Dad, a season ticket holder from the mid-80’s to the late-90’s, was at this game. He said it’s by far his favorite Blackhawks game ever. It was also by far the loudest roar he has ever heard in over 30 years of going to Blackhawks games at Chicago Stadium and the UC. He talks about the memory of this game with a certain amount of reverence that shows me how important it was in the moment for Hawks fans. Pat Foley’s call of this goal is also a classic: “AND THE BLACKHAWKS ARE ON THE VERGE OF GETTING RID OF THE RED WINGS!”

The Hawks went on to sweep the Oilers in the conference finals, a run where the Blackhawks won 11 consecutive games through the playoffs, an NHL record. Unfortunately, the Hawks were eventually swept by Pittsburgh in the Stanley Cup Final. But goals and moments in 1992 like Sutter’s just add to the great memory of that season. 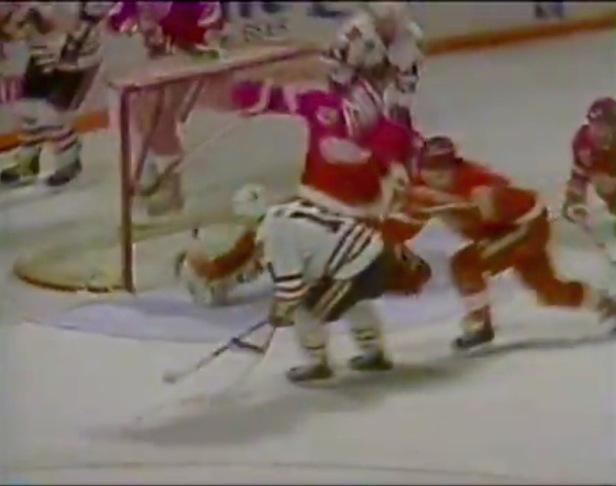