Highly touted Blackhawks prospect Phillip Danault could be sidelined for as much as four months after successful hip surgery today to repair a torn labrum. Danault saw two games of action during the 2014-15 season, failing to score a point in either game. He was drafted 26th overall by the Blackhawks in the 2011 NHL Draft, and has spent his time since then developing on the AHL Rockford Ice Hogs. Danault has been talked up as the next Marcus Kruger type player for the Hawks, and it was being anticipated that he could see a lot of time up in Chicago this season. This injury now puts a lot of that in doubt. Danault is just another name on a lengthy list of players who won’t be with the Blackhawks on opening night: Saad, Sharp, Oduya, Johns, and possibly Patrick Kane.

In other news today there was a leak of what is rumored to be a potential jersey for the Minnesota Wild for February’s outdoor Stadium Series game against the Blackhawks. It wasn’t clear whether this jersey design was for the North Stars-Blackhawks alumni game, or for the actual NHL game. But what was clear was the UNBELIEVABLY BRILLIANT AND BEAUTIFUL North Stars kelly-green and gold design that was leaked by @VintageMNHockey on Twitter. First of all, the Wild should absolutely change their colors to these old North Stars colors permanently, and use this rumored jersey design. It looks absolutely fantastic, and ties the history of Minnesota hockey to their current franchise. We will have to wait to see if the leak is legitimate or now, but regardless this jersey design is a 10 out of 10 in my book, and I hope that the Minnesota Wild see it and the positive reaction to it. The leaked jersey is shown below… How beautiful does that look? 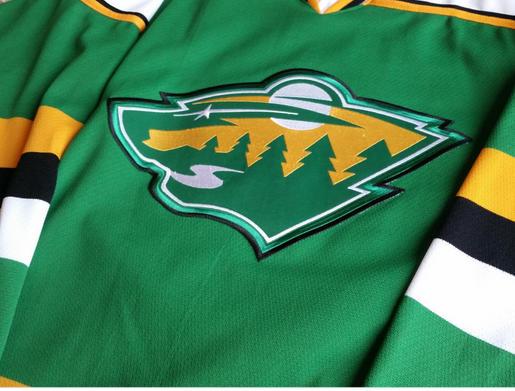 UPDATE: The Minnesota Wild Twitter account denied the rumor of the North Stars colored jersey for the Stadium Series. We’ll see if that is just a play by them to keep the news low, or if the actual design above is a fake. Hopefully they see all the positive reaction to it though.