The defending Stanley Cup champion Blackhawks barely snuck into the playoffs in 2011, and were paired up against the powerhouse Presidents’ Trophy winning Vancouver Canucks in the first round. The Canucks went up 3-0 in the series, and the Blackhawks looked done. But after two straight blowout wins in Game 4 and Game 5, the Hawks suddenly had life, and were back in the UC for Game 6 with a chance to force a Game 7. Only three times (In 2011, Kings comeback vs. SJ hadn’t happened yet) in NHL history had a team overcame a 3-0 series deficit in the playoffs. The Blackhawks were looking to become the fourth. After Michael Frolik’s penalty shot in the third period tied the game 3-3, the two teams headed to overtime where unlikely hero, little Ben Smith, scored to send the series to a seventh and deciding game.

The 22-year old Smith scored the biggest goal of his career and sent the UC into a frenzy. The winning play was set up by Marian Hossa imposing his will along the boards to corral the puck through the Canucks’ defense and into the slot before passing to Hjalmarsson. Hammer did what every hockey player is taught to do, get the puck to the net and hope for a juicy rebound, and that’s exactly what happened.

The Blackhawks ended up falling to the Canucks 2-1 in Game 7 in overtime on a cheap Alex Burrows goal. The Hawks were unable to overcome the 3-0 deficit, but they came mighty close. The Smith goal stands out to me obviously because of the magnitude of the game. The underdog Blackhawks fought their way back against the mighty Canucks. It felt like after Smith’s goal that the Blackhawks had stolen back all the momentum, and would roll in Game 7 to knock out Vancouver for the third straight postseason. 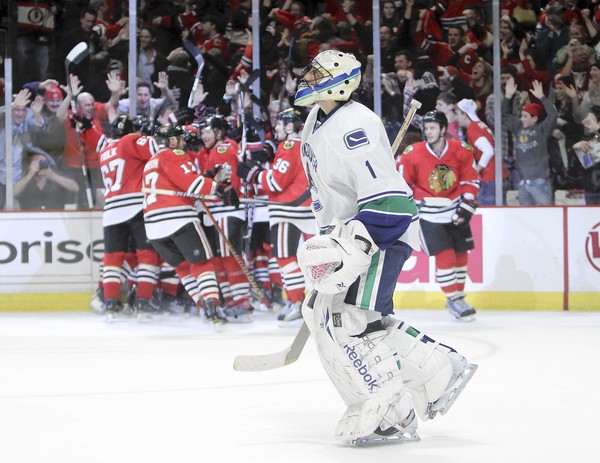 Smith’s goal, even though it was in a series that the Hawks ultimately lost, will go down as one of the most memorable moments in Blackhawks history. After being knocked to the mat, the champs weren’t dead yet. The 2011 Vancouver series ended in so much heartache, but it’s hard to find a goal from the past six seasons that was as surprising and beautiful as Smith’s in Game 6. The Stanley Cup Playoffs are defined by unlikely heroes stepping up in unlikely situations. The 2008 to 2011 Blackhawks-Canucks rivalry was so much fun to watch, and was as fierce as any in the NHL at the time.