Well the summer certainly flew by. It always does after a Stanley Cup championship. All of a sudden the parties are over and there’s just one more ceremony left before 2015 is in the rear view mirror. Tonight, the Chicago Blackhawks open the 2015-16 hockey season by hosting the New York Rangers at the United Center. Before the puck drops, the Hawks will raise their sixth Stanley Cup banner to the rafters, their third in the last six seasons. The ceremony will be nothing short of breathtaking and emotional. All of the hard work, all of the pain, sweat and joy from last year’s playoff run culminating in a beautiful banner raise in honor of last season’s accomplishments.

Then, they will drop the puck, and we’ll forget all about it.

The road to back-to-back titles starts tonight for the Blackhawks. The team will be once again led by a core of familiar names. But after this offseason there is a slew of new names donning the Indian head sweater this season. The Hawks had to say goodbye to many beloved players this offseason, some more shocking than others. It’s part of the business. Now, their job is to make sure the new guys can fit right in and hit the ground running during the regular season. This is now three straight deep playoff runs for the Blackhawks, something that was the reason for the defending champion Kings missing the playoffs last April. Hopefully the short summer will not affect the Blackhawks early regular season.

In a trade that shocked all of Chicago, the Hawks dealt young free agent superstar Brandon Saad to Columbus in exchange for Artem Anisimov, Marko Dano, and others. After the initial shock wore off, it was clear that the tough move by the Hawks did indeed have a few bright spots. Anisimov will give the Hawks some reassurance up the middle as center who can provide depth and score goals. Dano, recently sent down to Rockford to start the year, has been heralded as one of the best young prospects that the Jackets had last year. In another trade, the Blackhawks sent Patrick Sharp and Stephen Johns to Dallas in exchange for Ryan Garbutt and Trevor Daley. Sharp, a fan favorite in Chicago for many years, was seen by many as the core piece that was going to be moved this offseason. Johns, a young defenseman, was thought to be a lock to join the Hawks defensive core this season. Plagued by injuries, Blackhawks management though otherwise, and decided to trade him too. The Hawks also traded Kris Versteeg and Joakim Nordstrom to Carolina, and were unable to resign guys like Antoine Vermette and Brad Richards.

There are only two questions that remain about the Blackhawks season: Are they going to struggle at the start of the year because of the short summer? What is going to happen with the Patrick Kane investigation? I’ll answer the first question, because it’s much easier. It’s hard to tell how the Hawks will open the season. Obviously the regular season matters to an extent, but there cannot be a mindset of “we’ll just wait until the playoffs to hit the switch.” That didn’t work for LA last year, and it has never worked in the past. Sure the Hawks are able to put it in another gear come playoff time, but that comes with positioning themselves early in the season so that a playoff spot is never in doubt. I believe there is too much leadership on this team to let that happen at this point.

In regards to Kane… I don’t know. It’s been such a sad and frustrating situation, that partly ruined a summer of celebration. His investigation in no way mars the on-ice recognition and celebration of last season. There are still more questions than answers, and the situation is very blurry. Si I guess what I’m saying is, I don’t have an answer to that question. All I know is that he is going to play, and we will find out what happens down the road.

As for my season predictions. I honestly think the Blackhawks can repeat as Stanley Cup champions. It won’t be easy, but until someone knocks them off of their perch, they have my benefit of the doubt. Even with all of the offseason transactions, the Blackhawks are still just as good on paper as any team in the Western Conference. The Hawks lost a lot of guys, and yet find me a team in the West that is significantly better right now… There isn’t one. If anyone is going to knock out the Hawks, they are going to have to work for it. That is if the Hawks don’t knock themselves out by missing the playoffs, which I don’t believe will happen.

To close, let me go division by division and give my predictions for each one… 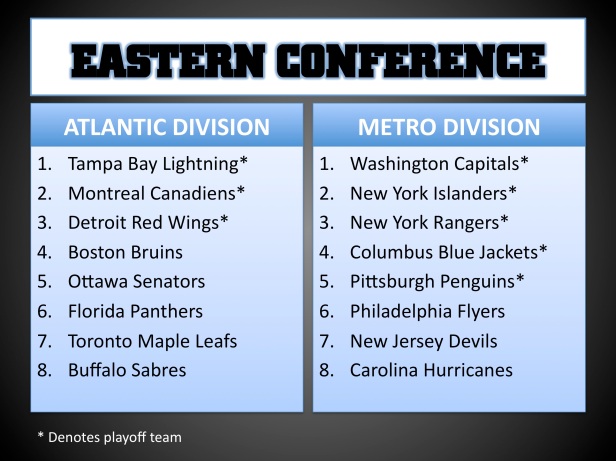 I think the Blues will do their normal stuff during the regular season. Be really good, give their fans a ton of hope, and then collapse in the first round. Happens every year like clockwork. The Central is the most loaded division in hockey once again, and like last year it is really hard to predict the order. Seemingly anyone in the division could make a run at the playoffs. The Pacific is down to three real contenders: Anaheim, LA and Calgary. The Ducks and Kings should find a way in, they’re too talented not to. The Flames are my wild card team this year. A lot of potential, young talent, and expectations. Could make a run in the West, or could tank out like the Avs did last season. The Atlantic, like the Pacific, is down to three or four contenders in my opinion. Tampa and Montreal will once again be the class of that division, with Detroit and Boston battling it out for the last playoff spot again. The Metro is kind of like the Central of the East. Just loaded with tons of talent. I think Washington, off of a lot of momentum from last season, will take that division, followed by the crazy talented tow New York teams. I really like Columbus, and not just because they acquired Brandon Saad. They finished last season 11-1, and without injuries would have probably been a playoff team. The Jackets have tons of talent, and any time you have a guy like Bobrovsky between the pipes you have a chance to win. The Pens round out the Metro, making the playoffs behind a solid season by Phil Kessel. Again, like the Central, these teams in the Metro are interchangeable. I could see those five finishing at the top in any order.

Well, we are finally back to the best time of the year. It’s finally hockey season again. It’s going to hopefully be another fun ride for Blackhawks fans. The road to a repeat starts tonight GO HAWKS!

One thought on “Blackhawks 2015-16 Season Preview”